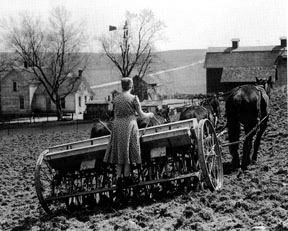 Everywhere you turn life has become complicated.  With a cell phone in my pocket, people can reach me in remote places or traced me down with a GPS device. Ironically, that cell phone that helps me is also said to be possibly killing me at the same time. Yet, life was much simpler.

Before the Industrial Revolution, life was centered on land and labor. On this land, God gave man his divine “agrarian calling.”  Humanity was technology poor yet spiritually rich in the Agrarian Era. In the same framework, one can analyze the moral compass of society through the ages.

Agrarians had a love for community and order; a deep respect for the environment; and a genuine peace with their Creator. Family was first! Agrarians were independent decision-makers.  However, Agrarians went away from the land with every economic advancement.

From the steam engine to the Internet to nanotechnology, humanity has transitioned from the physical labor of the land to mental brain power away from the land.  Andres Edwards, author of The Sustainability Revolution, echoes the advancement of this period: “These inventions contributed to increase production and economic growth in the textile, iron, rail and steamship industries that have left an indelible mark on our current society.”

Yet, the effects were not all positive.  Farmers went from freedom in the land to industrial slaves. During this transition, managers controlled the factory workers. These forced interactions created conflict because farmers and industrial society had different value systems.

Each successive wave of technology brought with it giant leaps in productivity while expanding the moral decay of mankind.  In fact, the Industrial Era ushered in a period of materialism, competitiveness, self-sufficiency, and the supremacy of man. With each technological advance, social consequences also swept across the world like a tidal wave.

Are the principles of the Agrarians lost? If not, why?

12 thoughts on “Meet the Agrarians”