I sit in the bleachers anticipating what will happen next. I’m at the Tennessee State Championship, watching my son’s high school team compete.  It’s the girl’s day to challenge for a title.   I thought it was a highly unlikely event since the girl team had only seven girls competing (two freshmen, two  sophomores, one junior, and two seniors); they were completing against larger schools with more athletes.  It was the classic matchup of Goliath and David.

At the final event of the night (4 x 400 relay), Brentwood was leading by two points. The West Relay team (which included two freshmen, one sophomore, and one senior) finished fifth in the preliminaries.  Things were different in the finals. The girls ran like they were on fire. West’s Tamara Hundley noted, “Coach Crocket told us we needed to win this event to win State. We were not going to be denied.” In an electric finish, senior runner Maddie Treasure ran the anchor leg, came from behind and winning
the event in 3:56.82. It was their best time of the season and provided the team with another successful year. Knoxville West had won its second consecutive Class AAA team title by edging out superpower Brentwood High (62.5 points to 54 points) with the guttiest performance of the night.  Winning only one individual event, the team systematically scored in each event.  The
determination paid off. 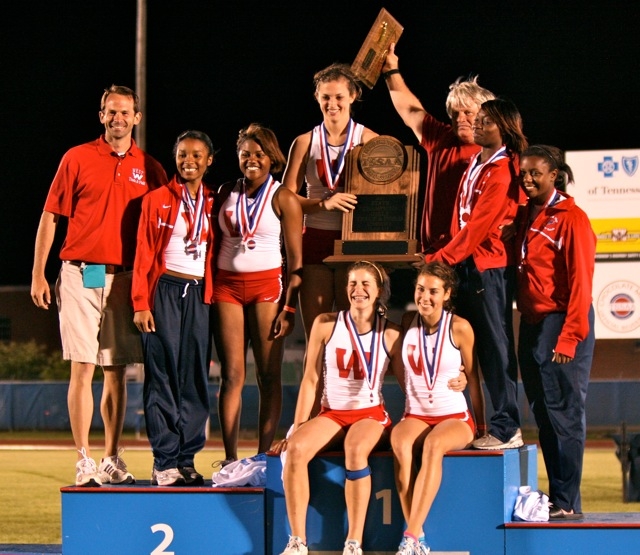 The Magnificent Seven (Maddie Treasure, Riley Campbell, Maya Barreso, Kayla Newsby, Shantyra Delaney, Kaylah Whaley, and
Tamara Hundley) had found another way to win its fourth state championship. Celebrating that night, I ran into a rival coach from another area; the coach had won a state track title before, edging out West High to win.  He was disgusted that a girl’s track team
could score just 60 points and win a state championship.  Of course, it was easy for me to figure. I had watched the coaches over several years.  Will Jay and Mike Crocket had developed a masterful strategy of maximizing their team’s potential (this year they participated in 11 of 19 events) and creating a high-performing team.

Coach Crocket stated, “This is about the guttiest bunch I’ve ever had….We lost 50 points from last year’s team and had a
lot of injuries. These girls laid it all on the line.”  With collegiate All-American hurdler Jackie Coward of University of Central Florida graduated from the program, many people figured the West track would fade into the wilderness like so many other
programs.  The effort of this track program demonstrates the importance of developing a high-performing
organization to sustain success in the future.

When individuals work together, organizations often perform better. Therefore, working toward a shared vision and belief system are critical steps.  Gareth Jones and Jennifer George, authors of Contemporary Management, note the importance of good group dynamics: “People working in a group are able to produce more or higher-quality outputs than would have been produced if each
person had worked separately and all their individual efforts were later combined.”

The authors further suggest a competitive advantage for organizations working in groups and teams; the organization should aim to:(a) enhance its performance; (b) increase its responsiveness to customers; (c) increase innovation;  and (d) increase employees’ motivation and satisfaction. Yet, building a high-performing organization is no easy task.  Many organizations have faltered
in thinking that simply optimizing their resources with “good management” and utilizing good technology are enough to stimulate high performance.

Like the Knoxville West girls’ track team, organizations must find ways to overcome challenges so that they can become successful. People are a critical element to this organizational performance puzzle. Therefore, leveraging people is as important as managing resources in order to sustain high performance in organizations over the long term.