Speaking to a packed crowd at the 2019 ACBSP Conference, Dr. Daryl D. Green from the Oklahoma Baptist University, revealed that recent research shows Generation Z students are not only the most diverse and inclusive yet, but also the most ambitious. Making up nearly a quarter of the American population (some 74 million young adults), they shun the traditional employee route of their predecessors, with 72% of them wanting to start a business with 61% preferring to be an entrepreneur rather than an employee.

This high percentage reflects the differing work ethic of these students. Having never known a world without social media or smartphones, 84% of participants in a recent study by Forrester showed they regularly multitask with an internet-connected device when watching TV, whilst 66% believe technology makes anything possible. Not just digitally savvy, these students are driven to set themselves apart with nearly 50% participating in internships during high school for the purpose of advancing themselves professionally and 26% currently volunteering in their spare time.

Therefore if Universities want to continue to attract the best students, it is important for them to adapt their teaching practices for Generation Z. Dr. Green broke this down into seven suggested practices;

Summing up, Dr. Green said “For the first time in history, there are now 5 generations coexisting in the work place and Generation Z, with its diversity and ingenuity, may be the best of all. This is why it is so important for universities and places of higher learning to encourage the natural entrepreneurial spirit of the most tech savvy, pragmatic and diverse generation yet; enabling them to join the workforce ready to hit the ground running and perhaps inspire businesses to adapt to the future.” 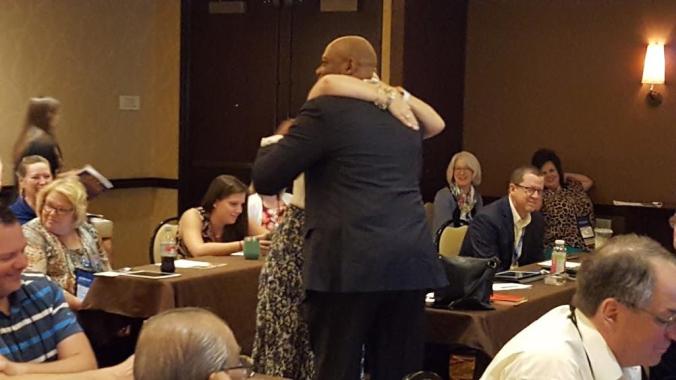 Caption #6:  Dr. Green reunites with a former classmate from his doctoral program.

With its campus in Shawnee, and locations in Oklahoma City and Broken Arrow, OBU offers 10 bachelor’s degrees with 88 fields of study and 5 master’s degree programs. The Christian liberal arts university has an overall enrollment of 2,073, with students from 40 states and 35 other countries. OBU has been rated as one of the top 10 regional colleges in the West by the U.S. News and World Report for 25 consecutive years and has been Oklahoma’s highest rated regional college in the U.S. News rankings for 23 consecutive years. OBU is one of the three universities in Oklahoma and the only private Oklahoma University listed on Great Value College’s rankings of 50 Great Affordable Colleges in the Midwest. Forbes.com consistently ranks OBU as a top university in Oklahoma, and the Princeton Review has named OBU one of the best colleges and universities in the western United States for 12 consecutive years.

Dr. Daryl Green, assistant professor of business at Oklahoma Baptist University and Dickinson chair of business.  He is an award-winning author with more than 30 books. He and his wife Estraletta have several years of social and competitive ballroom dance experience, competing in Georgia, Louisiana, and Oklahoma. Dr. Green has taught social dancing classes and is a former president of the Knoxville Chapter of USA Dance Inc.