Purposeful Management may be a phrase you are not familiar with, however, when you think about it, purpose matters in everything we do.  Management involves not only administrative responsibilities, but often includes overseeing and supervising others.

What does it take to be a purposeful manager? Why is it important to the bottom line?

Hopefully, these two critical questions will be answered in the following Seven (7) Guiding  “E” Principles to Purposeful Management:

You know about the downfall of those who have chosen to disregard ethical codes of honor and the negative outcomes of those choices.  Many of these unethical behaviors were influenced by the desire for greater power, wealth, material gain or selfish pride and greed.

Managers who find themselves lured by these temptations are vulnerable to ethical transgressions. Today’s most successful businesses operate from a values perspective, choosing to uphold moral standards with integrity.  By establishing ethical boundaries, one can protect their honor and avoid the traps of greed.

One of the first steps to encouraging and endorsing diversity is to first examine one’s own personal values and beliefs.  Ask the hard questions of yourself about how you view those outside of your own ethnic group or class.

Are you aware of your own hidden biases that can unconsciously direct your behavior toward others with whom you interact with on a frequent basis?  Diversity means “different”.  Different means “no two exactly alike”.

To respect and appreciate differences within your organization in regards to socioeconomic status, class, gender, age, culture, and various other determinants that often cause discrimination and stereotyping is a positive way to encourage and endorse diversity.

Recognizing the strengths, talents and abilities of those whom you manage and providing the necessary supports and resources to further their development is to the organization’s advantage and to yours.  The cost to hire new employees is much greater than to retain current employees.

To retain quality workers is a desire for most organizations.  When employees are rewarded with advancement opportunities and training venues based upon merit and capabilities, statistics reveal that those employees are most likely to be loyal to the company and to give their very best efforts.  Elevating and educating current employees through mentorship and promotion serves as a positive reflection upon you and the organization, especially when good employees are recognized, rewarded and retained.

Excellence does not mean the same thing to everybody.  Some people think that “excellence” means “perfection”.  Others think “excellence” is “doing or being the very best”.  Since no one is perfect, I concur that excellence is best described as “doing and being one’s very best.”

With that as the mark, striving for excellence is to aim to be and do the very best that you can.  Mediocrity is unacceptable.  Having a mindset or mentality that the mark of excellence is what you are aiming for and desiring to achieve sets the tone for those you are leading.  Excellence begets excellence.

A friend of mine told me about an organization that she was unexpectedly fired from by a new manager who came on board.  He was referred to as a “micro manager” who abused his power of leadership through intimidation and fear tactics of control.

The environment became quite hostile and the production of the employees decreased significantly as did their morale. Fortunately, he was terminated after the first year, but it was too late for my friend and her colleagues who had already quit.

The moral of this story is to exhibit the behavior you want to see.  Having a disposition of hardness and mean-spiritedness creates alienation, not unification. Micro management in this case did not result in positive outcomes.

The old saying that “you catch more flies with honey than with vinegar” certainly applies in this situation.  Most people respond positively to kindness, respectfulness and consideration of their needs.  Being the example requires not only talking the talk, but also walking the walk.

The principle of equity is all about being fair, impartial and honest. Another friend shared an experience he had recently with his supervisor when he had asked to be off for a couple of days to attend his aunt’s funeral.  He never misses work and is considered one of the most productive workers in the company.

His supervisor told him he would not approve his leave request because too many people were already out.  However, my friend knew several of the other workers who had been approved for such things as the loss of a pet and personal business, and both workers had irregular attendance and only satisfactory work ratings. My friend had to threaten to file a grievance before the supervisor reluctantly granted him emergency funeral leave.  Was this equitable treatment? You decide.

Shun egotism.  John Bright defined an egotist as, “A self-made man who worships his creator.” To embrace humility is a characteristic oftentimes lacking in management because it is incorrectly perceived as weakness.

Purposeful management matters, not only for the bottom line of the organization, but to the line of employees that make it happen.

Please provide comments and input on this article to this guest blogger. 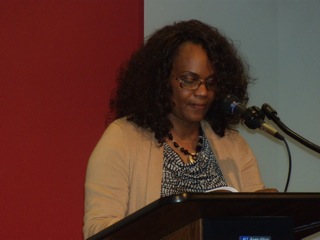 Gloria Thomas Anderson, LMSW, is a licensed master’s level social worker, educator, and diversity facilitator.  Currently, she is a Clinical Instructor at the University of Missouri-Kansas City in the School of Social Work and is a frequently requested lecturer/presenter on issues of diversity, grief and loss and end-of-life care. To learn more about her services and products, visit her website: www.gloriathomasanderson.com or email her directly at gloria@hearttones.com .